Oh no! The room is getting flooded! Play as 4 different lab creatures, jump your way up and close the valve before it's too late!

This game was created in 72 hours by Mors, Renhoek, Gaem, Fira, sooshy, CosmicGem and Darkonius Mavakar for the 42nd Ludum Dare with the theme “Running out of space.”.

Left, Right, Up and Down: Move

on that last level I was glitching all over the place, it was fun.

for me the wall jump is a bit clunky

A fine platformer with fantastic pixel art awaits the player here! <3 The different movement patterns of the dragons made sure that each level was like a little puzzle whose ideal solution one has to find out first. And the additional challenge with the collection of small squeaky ducks also brings in some extra pep. :) A great game, which I have gladly recommended in one of our compilation articles about the Ludum Dare 42 and of which I have shown a minute of gameplay in the accompanying video. Keep it up! <3

I had no Idea these were dragons, they just liiked like some random pixalated cretures on a screen to me.

Played through this on my channel (although I got exactly none of the ducks :P), really enjoyed it!

Game ramps up in difficulty pretty quickly. Love the art but is hard to tell if certain things are decoration or actually do something.  If difficulty increased a bit more gradually would allow player some leeway to explore and test things out.

I don't know why would you have problems with level 3. It's not even  that hard, especially when compared to the rest of the game.

I noticed a pretty nasty bug that makes the game completely unplayable on newer/gaming monitors.

At first I was completely and utterly pulling my hair out at the sheer difficulty. I mean, I have played Super Meat Boy, and yet I could not get past the third level of this game! I died over 100 times in level 3 alone, it felt like the game was just plain running too fast. The water just zooms up at the point where you pretty much have to speed-run the entire level, the green lizard character was hopping around with the speed of Sonic but with very little control, it barely would cling to wall for a quarter of a second before falling, it felt like I never had even close to enough time to react to anything, as if the entire game was running in fast forward....

.... and it turns out, that's exactly what was going on. I have a 144hz monitor, and I have seen this issue before with 2D games that have v-sync enabled. Many of them just simply advance the game by one frame every time the monitor refreshes, issue is, many also fail to take into account that there are monitors that operate at 120hz, 144hz, or even 240hz. Meaning the game can run anywhere from twice to FOUR times as fast on these monitors. And depending on the game, not all elements are even synced to the refresh, so it's possible for some elements of the game to run far faster than they are supposed to, but not others.

I have seen this exact issue crop up in other 2D games, I experienced it in Shovel Knight (was able to temporarily fix it by turning off V-Sync until the game was patched), Phantom Breaker (no option to disable V-Sync, so had to wait for a patch) and specific levels in Fox n Forest (no option to disable v-sync AND was not patched).

As soon as I used a setting to force my monitor into 60hz mode, this game became significantly more playable and felt like it was running in slow motion (likely because I was so used to it running so much faster). So this might be something you want to look into, more and more monitors are being manufactured with refresh rates of 120, 144, or 240hz nowadays, and this game is unplayable on all of those because of this.

Oh damn thanks for the notifying me. I actually have a TV with a higher refresh rate connected to my PC, so I tried the game on it and it seems to run just fine. I've also never heard similar reports from anyone else, so it might have to do with your PC? Either way, I'll make sure to add a V-Sync toggle key to this and all my future games though, just in case.

Not sure how it would work if you have a TV or multiple displays connected, it might not support outputting over 60Hz to a TV (since I think TVs only go above 60hz for active 3D, many of the ones that advertise that they are 120 or 240hz actually only accept a 60hz signal and internally up-convert it to 120 or 240) or it might lock all the displays to a refresh rate that all of them can do.

Glad to hear about the V-Sync toggle being added. While obviously fixing the issue would be preferred, I admit that is harder to do (especially if you don't have a similar display to test) and could be a lot of work depending on how much of the game is tied to the refresh. If getting it to work with v-sync is too much of an issue, is it possible to somehow have the game detect if the display is above 60hz and default the v-sync to off if it is?

I even found a forum thread someone asking if that would happen and everyone's answer seems to be no: https://forum.yoyogames.com/index.php?threads/v-sync-question.40821

Actually nevermind I just got someone else saying the same thing, I guess I will have to look more into it LOL

Same situation for me on my 165 Hz monitor, only on the HTML 5 version. I made it to the 5th level  The downloaded version ran fine. Felt almost like slow-mo, so I beat it in 15 fails ;)

Oh. That makes sense. Now I feel better about making it to level 5 on my 165Hz monitor... I thought it was pretty punishing...

I reached the end!!! Fails: 72. I didn't think the rubber ducks were THAT important so 1 rubber duck. ;)

Solid game, the little character designs are cute, though I found the walljumping to be a little finnicky seeing as you have to cling to the wall beforehand and it feels like there's a slight delay before the lizard clings. Overall a very enjoyable short little platformer.

Wow, this is insanely difficult, haha.

Awesome art. I added this game to the Ludum Dare 42 picks collection that will get featured on the itch.io homepage. 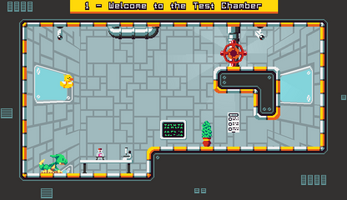 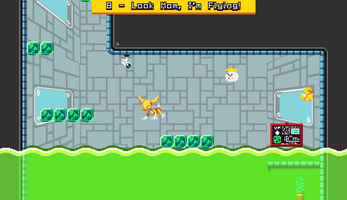 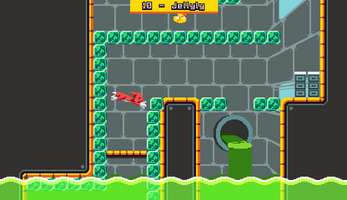 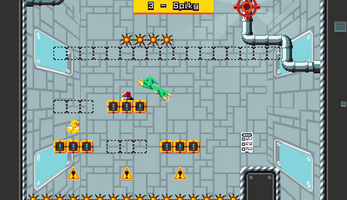